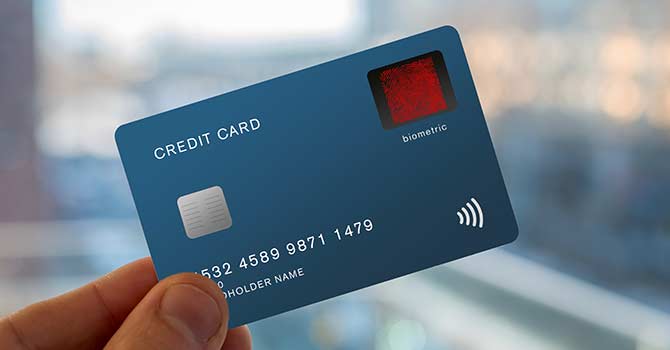 Biometric Payment Cards: The Next Level of Security

Soon, a new secure payment method will be at our fingertips.

Consumers in today’s age have a lot of passwords. We use them at work and in our personal lives. Every account login, PIN payment, security system—you name it—requires a password, and for good reason. We set them, update them regularly, hope nobody guesses them and that we don’t forget them.

The payments industry is saying goodbye to passwords as it moves toward new ways of protecting our data. A new payment card is in its early life stages: the biometric card.

Just as smartphones and security systems offer fingerprint scanning instead of passwords, credit card networks are hopping on the biometric bandwagon. A fingerprint can be used instead of a PIN or signature for in-person purchases.

Mastercard and Visa launched pilots of their biometric payment cards in select markets earlier this year. They’re on the brink of hitting the global market as testing continues and banks become certified with the card brands to issue them.

The merchant’s payment processor must have the right systems in place to recognize biometric card authorization codes, and approve or decline them as needed. Merchants don’t need new EMV terminals, but their EMV terminals must complete the Mastercard Terminal Integration Process (M-TIP).

BankCard USA is preparing to support biometric card specifications. We envision this payment card technology becoming a next-generation norm, and want our merchants to be ready to take advantage of its benefits.

Biometric cards give cardholders, merchants, banks and payment processors more certainty that the person making a payment is the genuine cardholder. With credit card theft at large, using fingerprints is a surefire way to stop credit card thieves who have access to PINs or can fake a signature.

Since the major card brands made signatures optional earlier this year and there’s also a PIN bypass option for some EMV merchants, fingerprints are proving to be a safe defense against card-present fraud.

When customers get a fingerprint card, the template is encrypted onto the card’s biometric fingerprint sensor. The card issuer only has access to it at the time of enrollment, and the card network never does. The fingerprint data never leaves the card during a transaction, so merchants and their terminals never have access to it either.

The fingerprint matching system is only on the card and the template is securely encrypted. For example, if your card is stolen and the fingerprint template is somehow extracted, it would only look like a useless string of zeroes and ones. It needs the real cardholder’s fingerprint to work.

On top of their security, biometric cards offer other benefits to merchants. Lines slow down when customers forget PINs, enter them incorrectly, and have to get out a different form of payment. Fingerprints are fast, convenient and safe.

A few other notes about biometric cards:

Staying a Step Ahead

Biometric cards, as they hit the market, will cost more than standard credit cards. Over time, the prices are expected to drop. But the cost of biometric technology pales in comparison to the possible cost of fraud.

According to a study by SmartMetric published in Biometric Technology Today, 80% of U.S. cardholders are seriously concerned about credit card and identity theft, and 67% say they wouldn’t mind paying for biometric cards.

A study by Visa echoes those statistics:

Here at BankCard USA, we like to stay three steps ahead of credit card fraud. Stay informed to protect and grow your business in the future of payments. We’re here to help.