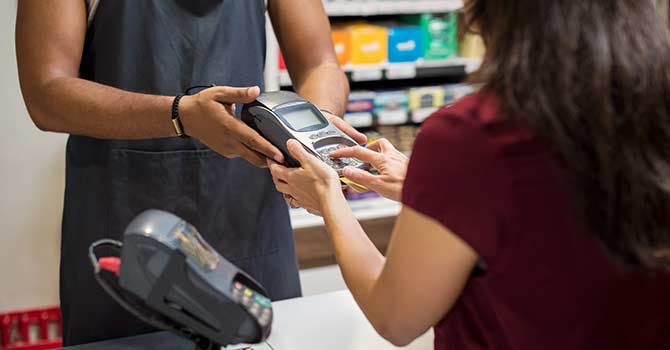 Card-present fraud used to be black and white—retail businesses didn’t have to cover the losses; the credit card issuing banks did. Since October 2015, the grounds have shifted dramatically.

That’s when the EMV liability shift took place. It says that merchants who don’t use an EMV chip terminal are liable to cover fraud damages when customers use an EMV chip card. Swiping magnetic stripes was introduced by IBM in 1960 and remained the norm for decades, but as we strive to stay one step ahead of advancing fraud technology, swiping magnetic stripes has passed its prime and is now nearly obsolete.

This might seem like old news—after all, the EMV shift took place over three years ago. Yet, only about 67% of retail storefronts have made the transition, Visa reported in 2018. Since the EMV liability shift, fraud has decreased 76% among merchants using EMV.

In addition, studies have shown that there’s been an increase in chargebacks for merchants who are still swipe only. Why? Legitimate cardholders are noticing the chink in their armor, and exploiting it.

When a customer initiates a chargeback, and the bank sees that the merchant swiped, the merchant doesn’t have a chance at fighting the claim. Friendly fraud, which used to predominantly occur online, is becoming more prevalent at brick-and-mortar stores. And as the number of stores that use EMV is increasing, the few that don’t have EMV are more likely to be targeted by friendly fraudsters.

What is Friendly Fraud?

Friendly fraud is a strange oxymoron. There’s nothing friendly about it. But it might have earned that nickname because the fraud is coming from the business’s customers who initially pay for a product or service with their real credit card, rather than a thief using a stolen or counterfeit card.

Friendly fraud occurs when customers dishonestly claim one of the chargeback reason codes—that the product was not as described, that they never received it, that it wasn’t them actually making the purchase, but rather an unauthorized user, etc.—in an attempt to get their money back and keep a product. It’s a form of shoplifting.

Essentially, friendly fraud is a tricky strategy used by cardholders who know the chargeback system is weighted in favor of the customer, and take advantage of it. It can also include instances when an unauthorized user in the same household, such as a child, uses a parent’s credit card, who then initiates a chargeback when they find out about it.

Merchants with swipe-only terminals are prime targets for friendly fraudsters. More customers have realized they can exploit them. When customer banks see that the purchase is being disputed and the merchant doesn’t have EMV, the merchant doesn’t have any defense against the customer’s chargeback claim, and they’re liable to cover the damages. When the chargeback occurs for a large purchase, the business can run into serious trouble.

So now, if merchants don’t have an EMV terminal, they’re subject to not only friendly fraud, but also the really unfriendly kind—fraudsters who have made counterfeit credit cards with magnetic stripe data (magnetic stripes can be recreated; chips cannot).

If the customer swipes an EMV chip card, an EMV terminal will recognize that it’s EMV and prompt them to dip it instead. Say a fraudster stole that card and copied the magnetic stripe data onto a counterfeit card. If he then swiped the counterfeit card at an EMV terminal, the same thing would happen; the terminal would ask him to insert the chip, and the merchant would then see that there is no EMV chip and know that it’s a counterfeit card. For merchants who are swipe-only, there’s no way to tell the difference.

The decision to stay swipe only puts a lot on the line.

Friendly fraud is still most common for online and phone orders, with studies pointing to women shopping online as the main culprits. However, since 2015, unlikely chargebacks are coming out of the woodwork. Even industries with historically low chargeback ratios, like restaurants, are seeing more after the liability shift.

While ecommerce businesses inevitably face disputes that are harder to fight, retail merchants have a clear solution: install an EMV chip terminal. The cost of upgrading equipment and software is worth saving money—and face—that comes with fraud, friendly or otherwise, in the future. While it may be impossible to avoid chargebacks entirely, the banks will at least consider your argument against the chargeback when EMV is involved and you have documentation of the transaction.

In addition, most EMV terminals are equipped to accept mobile payments and include other business-enhancing features. With so many customers already migrated to chips (In 2018 Visa reported that 97% of customers’ payment volume is through chip cards), you can publicize the security of your business while also keeping dishonest customers from taking advantage of it. Catch your business up with modern payment processing and install an EMV chip terminal today.