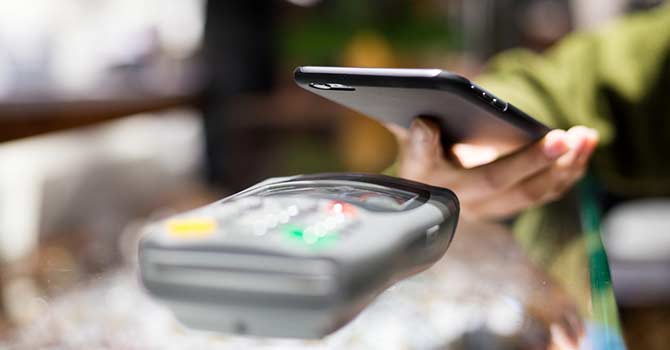 Mobile wallets are mobile device apps that allow people to store and use digital versions of their credit and debit cards. They eliminate the need to carry around a bulky wallet, or worry about a physical credit card or cash getting stolen.

If a smartphone does happen to fall into the wrong hands, the mobile wallet would still be protected by the fingerprint ID, facial recognition, or passcode the owner has set to authenticate and open it.

All it takes is a tap on the terminal for a customer to make a payment using their smartphone. Through Near Field Communication (NFC), the terminal is able to accept the transaction. Not only do mobile payments speed up your checkout line, they also help drive revenue by catering to customer preference.

How Does NFC Work?

Mobile wallet payments are called contactless because they don’t require physical contact between credit card and terminal, and instead get transaction data from the former to the latter through NFC.

Mobile payments are backed by leading-edge security. Take Apple Pay for example. When an iPhone user uploads their credit card information to a digital wallet, the card data is instantly tokenized and stored on a secure NFC chip in the phone.

The token is a random substitute that can’t be decrypted, so it’s worthless to credit card thieves. The token holds the place of the real card information, so nothing sensitive is ever stored on Apple’s servers, on the smartphone, or at businesses where the card is used.

Only the highly secure payment processor has access to the “token vault,” which holds the keys to match up tokens to the real card info they represent. To all other parties involved in the transaction, the token is meaningless.

Thanks to tokenization, NFC technology, and biometric authentication (fingerprint or face ID), mobile payments are considered even safer than traditional card-present transactions.

You can use a mobile wallet on your smart device and conveniently make payments in stores, or you can store a digital wallet on a computer to make online transactions with a simple click instead of keying in your payment information every time. For a big task, like Christmas shopping online, this is a major time-saver.

Digital wallets help reduce cart abandonment at your online store because payment occurs in one fell swoop, rather than requiring the customer to enter their information.

A mobile wallet typically refers to one that is stored on a handheld or wearable mobile device, like a smartphone, Apple Watch or Fitbit. A digital wallet securely stores payment data in the same way, but is typically stored on a computer and used for online purchases. Sometimes, the terms are used interchangeably or called e-wallets.

Consumers love mobile wallets because they’re a seamless way to pay in store, online and in-app, they help organize finances, and they consolidate things that are otherwise unwieldly or easily lost. In addition to payment cards, mobile wallets can be used to store other sensitive documents, like your driver’s license, transportation passes, tickets of all kinds, gift cards, and more.

With the help of an ever-growing number of apps, their functionality is expanding. For example, you could use a digital wallet to unlock the front door of your house instead of carrying a physical key.

Businesses love them because they’re efficient, secure, and support growth. Just as with EMV chip payments, merchants are protected against fraud losses when a customer makes a mobile payment (swiping a card is the least safe option; merchants are responsible for covering any fraud damages that stem from swipe transactions, rather than the card network).

Most EMV terminals are equipped to accept NFC payments—which include mobile payments and contactless credit cards. Implementing one is a great way to future-proof your business and give your customers the convenience they value.

We offer a variety of credit card terminals and POS systems that allow you to accept all forms of payment, and provide free consultations if you have any questions.